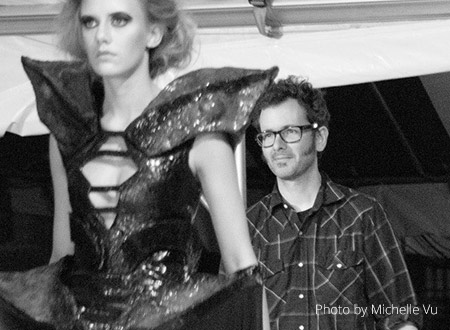 I have noticed a pattern as I look back on my last few years of design. My concepts seem to require complete separate projects before they can be realized. Here are some examples.

In 2008, I wanted to create outfits that would lend to a theatrical experience on the runway. The dresses where inherently theatrical and interesting, but I was not satisfied with the end experience. I should have put more thought into directing the walk. And I only had a couple of looks, which were not cohesive. So, for the next show, I created six dresses made of cut compact discs. The different dresses created a whole. I spent time developing the dress’s story as told through the runway choreography. (although I did this day of the show during hair/mu). The show unfolded as a procession, as an event. In 2010, I wanted the dresses to be sculptural, yet flexible. I wanted recognizable natural elements, like tree branches and animal motifs. I developed many different methods of reaching this end. After a lot of trial and error, I made a collection that I liked, but was not exactly what I was aiming for. I was happy with the colors and shapes I made, but the results were high-maintenance. The dresses could tear easily and were difficult to put on. The runway show extended the theatrical elements, with models interacting with each other. They marked each other with blue paint as they passed during their walk. I was interested in the idea of creation taking place on the runway- through dress modification or any kind of appearance change. I planned on having the final look be made of separate pieces that would be assembled before the audience. But the assembly turned out to be too complex. I had to assemble backstage.

During the next year, I focused on developing more durable solutions to reach my concepts. I discovered methods of making dresses stronger, lighter and more streamlined. I stopped using lace-up closures in favor of hook and eye closures. I figured out how to mix materials- how to have hard surfaces and soft surfaces connect and work together. A lot of experimenting resulted in my 2011 collection. This was a strong, cohesive collection, but it was still not the look I had been intending since 2010.

In preparation for my next collection, I further developed construction methods based on what I had learned during the previous year. I figured out how to build up surfaces to be sculptural, yet pliable. I could create dynamic silhouettes with projections and movement, yet still retain strength. I created a dress that could be assembled on the runway easily. I spent more time on finishing elements, such as creating different surface textures and finishing edges. I collaborated with dancers to present the collection. During the collection’s construction, I was constantly thinking of how the elements would come together- the dresses, models, hair and makeup, music, dancers, and lighting. And these ideas where directly stepping off the foundations of my previous years‘ experiences. In the end, my 2012 show was fully realizing what I had envisioned for 2010.

As I look forward into my next project, I cannot see clearly how it will turn out. It may become something different than I planned, but it will still be an amazing experience.